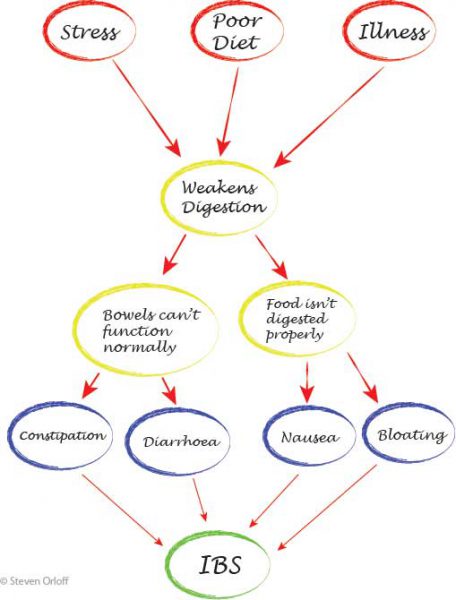 Irritable Bowel Syndrome (IBS) is a condition affecting millions of Australians.  Though Western Medicine hasn’t come up with an underlying cause they know it is often aggravated by stress. Chinese Medicine doesn’t recognise IBS as it is able to explain its pathology but in a different framework. It often falls into what we call a “Liver invading Stomach and Spleen” disharmony.  In Western Medicine there is 3 types of IBS as discussed below. Each of these can also have an underlying TCM pattern which is more likely for each.

though there are generalised symptoms with IBS, people can have a predominance of one group of symptoms, which can be classified as the following:

All of these symptoms come and go and are often triggered by stress and worry. The most common IBS symptoms are:

Chinese Medicine Theory behind the Cause of IBS

In Chinese Medicine there is the Five elements model, which is used to explain how the energy flows from one organ to the next, like a road map. The most common occurrence is what is called “Wood invading Earth”. This means excess energy from the Liver/Gallbladder over controls the digestive system (Stomach/Spleen). I akin this to the relationship between a big brother and little brother. The big brother keeps his smaller sibling in line, but when he’s aggravated the big brother takes it out on his younger sibling. When we get upset or frustrated, this disrupts the flow of the Liver’s Qi, which it then passes on to the digestion, either by over or under secreting bile and disturbing other functions. This impairs digestion resulting in such symptoms as bloating, pain, nausea and bowel problems. The energy of the stomach is not descending like it should so instead it goes up creating nausea or stops moving and causes bloating. If this goes on for a prolonged time the whole digestive system can become weakened. This reduces its ability to separate nutrients from waste properly and diarrhoea or constipation results. Other symptoms include fatigue, poor concentration, reflux and abdominal pain.  This is a common pathology of IBS-A.

IBS-C can also have several pathologies, it can begin as described as above, but turn to heat from the stagnations. The heat dries out the bowel and you suffer constipation.  Often there will be other symptoms of heat such as acne, thirst and night sweats or indigestion.

IBS-D can result from a very over active Liver and a weak Stomach and Spleen, which results in urgent bouts of diarrhoea.  If it becomes chronic, it can result in Spleen and Kidney weakness which is characterised by urgent loose bowels upon waking.

As shown in the diagram above, another cause of IBS is when someone has never fully recovered from an infection. How often have you heard people say something like “My digestion has never been the same since I got food poisoning overseas?”. Under normal circumstances, post illness the body is able to rejuvenate itself and return to normal, but sometimes this isn’t the case. With the digestion left weak it creates a vicious cycle of reduced energy production and increased toxin formation, which develops into Irritable Bowel Syndrome. Left unchecked, it can evolve into food intolerance’s and even Celiac’s Disease.

The goal of treatment is to harmonise the organs of digestion again. Acupuncture is used to stop one organ over acting on the other and restore balance. As a preventative measure, points are selected which calm the mind to help reduce the stress which tends to cause it.  When the organs are back in balance, painful symptoms such cramping, bloating and nausea may improve. You may also notice your bowel movements are fluctuating less.

A meta-analysis from 2014 of 6 trials on Acupuncture and IBS concluded: “Acupuncture exhibits clinically and statistically significant control of IBS symptoms.”

However, another trial performed in 2017 concluded the opposite: “The lack of differences in symptom outcomes between sham and true treatment acupuncture suggests that acupuncture does not have a specific treatment effect in IBS.”

These conflicting results imply that their is potential for Acupuncture to assist with IBS symptoms, but more investigation is required to provide conclusive evidence of efficiency.

If you would like to discuss this or any other health concerns, feel free to call the clinic on 9796 2388